Since we are based in the UK, due to the ongoing BREXIT negotations we are having to remove our offers from this website for a short while.

We hope to be able to be up and running again early in the new year.

Where and How to grow Yarrow Achillea Millefolium 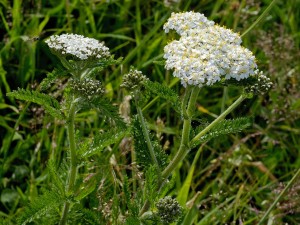 Yarrow is one of the most common perennial wild flower species. It is distinctive in appearance at every stage of it's growth. The foliage is feathery and delicate. The white flower heads are flat and made up of many very small flowers. The dried flower heads can be very attractive.

Yarrow will grow in most places. It is seen along road verges in meadows and in garden lawns. It has a creeping rootstock or it can spread by seed.This tends to mean it will survive in most soils. Because of this it is normally a staple part of most meadow mixes.

Yarrow will grow to a height of about 8 to 40 cm. and it flowers between June and September.

Where to grow Yarrow, Achillea Millefolium. Whilst it does best in well drained soil it will cope with most conditions and can spread quickly.

How to grow Yarrow, Achillea Millefolium. Sow the seed in prepared soil in either spring or Autumn. If producing your own plugs  plant seed in trays and plant out again in Spring or Autumn

The plant has a long history as a powerful 'healing herb' used topically for wounds, cuts and abrasions .This medicinal action is also reflected in some of the common names mentioned below, such as staunchweed and soldier's woundwort.

Yarrow has also been used as a food, and was very popular as a vegetable in the 17th century. The younger leaves are said to be a pleasant leaf vegetable when cooked like spinach, or in a soup. Yarrow is sweet with a slight bitter taste. The leaves can also be dried and used as a herb in cooking.